The cheapest and most successful solution for a Real Grass Lawn in Spain all year round. 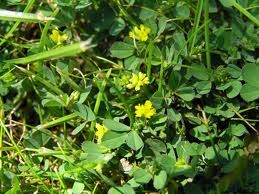 In lawns it survives mowing by developing a low growth habit.

Trefoil is closely related to the Lucernes but is shorter lived. It is generally biennial but sometimes lives only one year. It has a taproot with comparatively few branches, about a foot deep on an average. The stems, which are developed in great number from the crown of the root, are decumbent or ascending. They often creep along the surface of the soil but do not produce secondary roots.

The plants are therefore spreading in habit, especially as the stems are usually much branched. The leaves consist of three leaflets, each of which has a short stalk. The flowers are yellow, much smaller than those of the other species of Medicago mentioned, and in a short cylindrical head. Trefoil closely resembles certain yellow-flowered species of clover (Trifolium) but can be readily distinguished from them.

In true clovers the blossoms do not fall off when flowering is over, but remain, withered, until the fruit is ripe, making the heads brown and hiding the pods. In Trefoil the blossoms fall off as soon as flowering is passed and the pods are therefore visible while ripening. They are small, kidney shaped, rough-ridged and black-hence the name Black Medick. Each pod contains only one seed and falls off without breaking.

On account of its rather shallow root system, Trefoil is more independent of the subsoil than the lucernes and most clovers. It makes fairly good growth on rather poor land but succeeds best on soils not too stiff and wet. Lime is necessary for its proper development and a liberal amount of potash and phosphoric acid are beneficial.

Our Type C herbicide will control this weed.